Release The Sound You Were Created To Make

Release The Sound You Were Created To Make 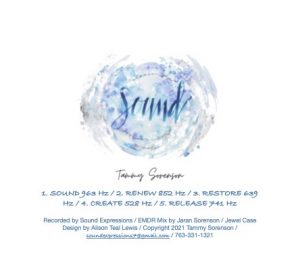 Release The SOUND You Were Created To Make

Holy Spirit gave me two dreams, along with confirming visions, in early summer of 2021. The dreams and visions were specific to this brand new sound and healing therapy album assignment, Release The Sound You Were Created To Make. In the first dream, I received four targeted frequencies precisely for unlocking and engaging the healing of trauma through creativity. Because my next album project had already been revealed, I knew these frequencies were precisely for this project. I also knew these four frequencies were the manifestation of a prophetic word I had received about them back in 2013 through a holistic practitioner.

Release the SOUND You Were Created To Release and EASE for DIS-EASE
The second dream propelled the frequencies forward into the intention and focus of specified Scriptures, significantly highlighting and confirming this Kingdom assignment’s target being the healing of trauma. Because those details involve a personal testimony related to the pregnancy and birth of our twins, I will refer you to my book, Was I Not Listening OR Did Someone Not Tell Me for further details. Holy Spirit confirmed the trauma piece of these frequencies over the course of several days. I clearly discerned the frequencies, along with their Scriptural intention, were to be a  significant piece of my EASE for Dis-Ease Chart for holistic practitioners; strategic and intentional technique for the healing of both emotional and physical trauma. I collaborated with Alison Teal Lewis on the jewel case cover. Additionally, I have collaborated with a certified holistic aromatherapist and natural perfumer, Angela Vrettas of Scent of Life, on this Heaven-sent anointed cutting edge endeavor imparted through dreams and visions: Release The Sound You Were Created To Make. Her Holy Spirit blended gem essences correspond to the precise frequencies on this album, specific to trauma release, and are fragrantly, elegantly, aromatically, amazingly and profoundly beautiful!

This album release was recorded strategically using the four targeted frequencies, adding one additional frequency after confirming intercession with my collaborator, Angela Vrettas, who is creating a fragrance/gem product to correspond with each frequency for my EMDR version. I will be releasing my EMDR version of Release The Sound You Were Created To Make, in late Fall 2021, along with packaging the releasing and healing trauma through creativity technique utilizing tuning forks, oils/gems blends corresponding to the frequencies on this sound therapy album. I am thrilled to release this Kingdom of Heaven on Earth assignment on behalf of Sound Expressions listeners, clients, and holistic researchers engaged in the health and wellness of others walking in wholeness and freedom.

There are no reviews yet.